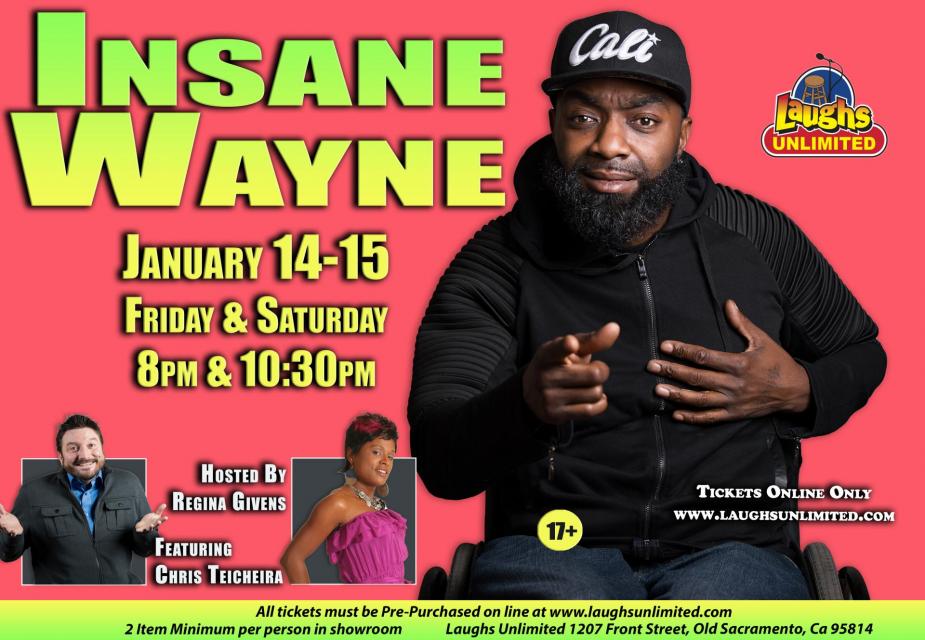 Insane Wayne is one of the hottest comics in the western hemisphere. He is a native of Stockton, CA. During his college years he was the king of playing the dozens (capping). Soon he was challenged by friends to bring his talent to the stage. He soon found himself at “LAFFS UNLIMITED” doing comedy in front of a live audience. Insane Wayne is a natural on stage. His talents have allowed him to travel the country and share the stage with well-known comedians such as DL Hughley, Katt Williams, Lunell and Lavell Crawford, just to name a few. In 2004 Insane Wayne suffered an injury that left him paralyzed from the waist down. He quickly recovered and began doing STAND-UP comedy from a SIT-DOWN perspective. Insane Wayne has distinguished himself as a comedian by winning the Bay Area Black Comedy Competition, The Black Expo, Central Valley Comedy Competition, he was runner up on the Shaq All Stars, Kevin Hart’s Hart of the City, and Nick Cannon’s Wild-n-Out. Insane Wayne is also a mentor to new and up and coming comics. “Life lessons taught through comedy.” Insane Wayne’s brand of comedy will truly inspire you. His journey will inspire you to believe in yourself.