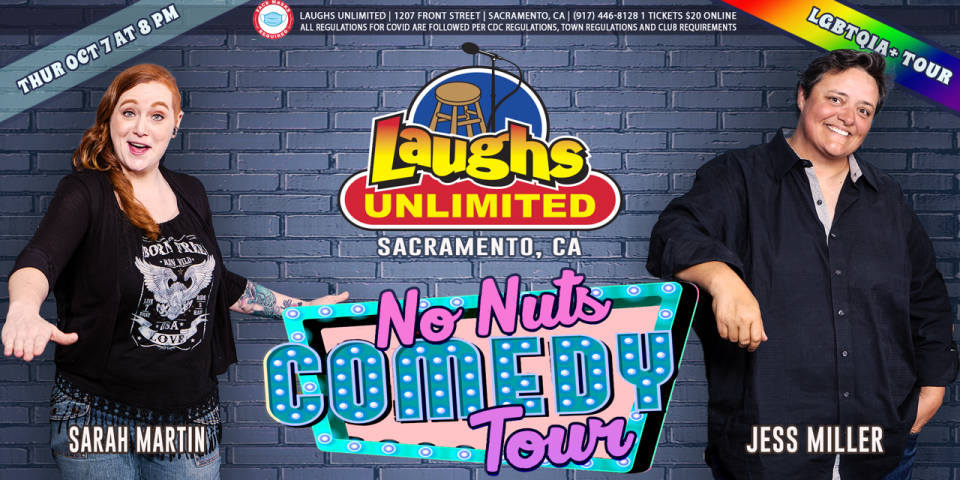 Welcome to the No Nuts Comedy Tour!
The No Nuts Comedy Tour is a female lead show of comedians who are unapologetically themselves on and off stage. The diverse styles of the comedians on the bill ensures something for everyone as it ranges from playfully irreverent and deadpan to highly animated and side-splitting stories and jokes!
Jess Miller (Women in Comedy Festival presented by HBO, iheartRadio, Caroline’s on Broadway)
Jess is a spontaneously energetic comedian and crowd favorite from her hometown in Massachusetts to the sunshine state of Florida. She loves breaking down barriers and making people laugh with her amusing observations about being gay in America. She has been up and down the East coast headlining and slinging jokes and is often found raising money through her Funnyraising Comedy Shows. Jess has performed at the Women in Comedy Festival, Boston Comedy Chicks, placed 3rd at the Devil Cup Comedy Festival in NYC, Big Pine Comedy Festival, Caroline’s on Broadway and more.
Jess ran a wildly successful monthly show called The “OMG! It’s Only Wednesday?” Comedy Show at the Hu Ke Lau in Chicopee, Massachusetts and has helped raise over a half of a million dollars for non-profits, groups and individuals, including her Annual Toy Drive for Foster Kids and Art Kits for Foster Kids.
She’s the Head Giver (that is the director of gifts, not what you’re thinking. Dirtypants!) of an anonymous group of individuals called “The Kind Squad” who work to help others in their communities.
Sarah Martin (Sirius XM, Roku)
A woman, but certainly not a lady. Sarah doesn’t care about being some classy broad, she’s from Boston. When not stealing cable from the neighbors, she has been building a name for herself with her playful and refreshing candor. Shortly after aging out of foster care and getting fired from Dunkin Donuts, she found a home on the comedy stage and hasn’t looked back. Sarah is the co-creator and co-star in Code Green which MSN calls a “darkly funny” web series about a psychiatric hospital. Her stand-up has been on Sirius XM, featured on Twitch TV, LadySpike and many festivals throughout the country such as the Women in Comedy Festival presented by HBO, NBC, and Showtime.
Joining us on each stop of the tour is our favorite local comedian!
See the website for more details….
www.nonutscomedytour.com