In 1859 it took from six weeks to four months to send messages across the continent to California. The Pony Express shortened that time to 10 days in April of 1860. Implemented by William Russell, Alexander Majors and W.B. Waddell, the route ran from St. Joseph, Missouri, to Sacramento, a distance of 2,000 miles. Originally there were 190 stations, 80 riders, and 500 horses. The Pony Express only lasted 18 months. The completion of the transcontinental telegraph in October 1861 caused its demise. The scheme bankrupted the owners but the legend of the Pony Express lives on today.

After working on a number of railroads in the Northeast, Judah was hired as the chief engineer for the Sacramento Valley Railroad in California, the first railroad west of the Mississippi River. Throughout the 1850s, Theodore Judah was known as “Crazy Judah” because of his single-minded passion for driving a railroad through the wall of mountains known as the Sierra Nevada, something that was considered impossible by many at the time. Although he did not live to see it, his dream was realized in 1869.

This monument to Theodore Dehone Judah, first Chief Engineer of the Central Pacific Railroad, was first erected in a Sacramento municipal park opposite the Southern Pacific Station. The cornerstone was laid April 25, 1930 and the completed monument unveiled February 25, 1931. The monument was later moved into storage during the construction of Interstate 5 and eventually placed in Old Sacramento. 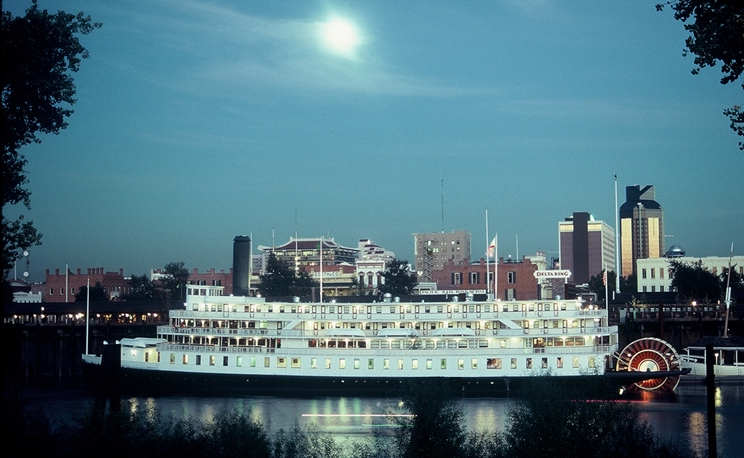 Now permanently moored hotel and restaurant, the Delta King is an authentic 285-foot riverboat. The King and her identical twin, the Delta Queen, were christened on May 20, 1927, and began their daily river voyages between San Francisco and Sacramento in June of that year. At 6 p.m. each evening, the grand ladies of the Delta left their docks for the 10 hour trip that included prohibition era drinking, jazz bands, gambling and fine dining. A stateroom was $3.50, but for a dollar and “your own blanket” the night could be spent on the Cargo Deck. The King and Queen reigned on the Sacramento River until the late 1930s when an increase in the number of roads, bridges and automobiles made river boating a less efficient means of transportation.

The Great Depression and World War II signaled the end of the sternwheeler era and both the King and Queen were drafted into the U.S. Navy to serve on San Francisco Bay as net tenders, floating barracks, troop transports and hospital ships.

At the conclusion of the war, the Delta Queen was purchased and taken via the Panama Canal to the Mississippi River where she still serves. The engines of the Delta King were taken for spare parts. The King was shuttled between Canada and California as a derelict with hopes of becoming a floating Ghirardelli Square or Chinese Restaurant, dashed at each turn by sinkings and litigations.

In 1984, after being sunk for 18 months in San Francisco Bay, the Delta King was towed to Old Sacramento, where it underwent a complete renovation. Five pain-staking years later the Delta King reopened to reign, once again, as the heralded monarch of the Sacramento River.